Looking for a new probiotic to add to your life?

This one’s fancy – if you look carefully, you can see the bubbles.

Normally, kombucha is not considered to be alcoholic – that is, if it is under .5% ABV (alcohol by volume). Often though, JUN rings in around 2%. Be forewarned. A tonic bar in Colorado had to get a liquor license to serve it!

I got my JUN SCOBY (symbiotic culture of bacteria and yeast) MOTHER on Etsy from Shanya’s Shop and only let this batch ferment for 3 days. Had I left it longer, there may have been more carbonation and a higher alcohol content; but I wanted to test it earlier rather than later in the suggested 3-5 day brewing cycle, for the sake of taste. Last time, thinking it was like traditional kombucha, I left it too long and it produced a concentrated, rather sour batch that while still drinkable needed to be diluted with water. Taste-wise, it’s not unlike the prebiotic apple cider vinegar drink, similarly made by adding few tablespoons to a glass of water. More often than not, I also add a little stevia to sweeten.

JUN kombucha is generally made using green tea and honey. Its origins are rather mysterious but it seems to have come from the East, some say Northern China and Tibet. It has a higher (good) bacteria count probably due to honey being used in its making and is more delicate than traditional kombucha.

There are numerous sites that describe how to make JUN and 2nd ferments that are yours for the googling. When you get your JUN SCOBY, though, it’s recommended you follow the directions provided. Only try other methods once you have a good supply of additional scobies in case experiments go wrong. Some people train sugar-brewed, black tea scobies with green tea and honey. It doesn’t produce what is known as a classic JUN, and from what I understand these scobies tend to break down over time; so hopefully, there are back up scobies to use again if this happens.

JUN, unlike black tea, sugar-brewed kombucha, reaches an alcoholic content of somewhere between 2-7% with its ABV slightly higher than traditional kombucha; again, possibly because of the honey. Many aficionados flavour-experiment using a variety of honeys (ie, alfalfa, acacia, lavender, orange blossom, etc) and some take this even further, in the 2nd ferment, and move into a mead-making territory.

JUN can also be brewed using a number of other teas, usually herbal, but again, it’s recommended that you hold back a JUN SCOBY mother so if experiments go sideways you still have one to create more from. In the past, I’ve successfully made it using hibiscus to create a bright pink, slightly fruitier drink and I’ve used butterfly pea flower tea and made an equally stunning, jewel-toned, turquoise brew.

JUN, again, unlike traditional black tea kombucha, is ready sooner and appreciates cooler temperatures (70°F versus 77). Its quicker 1st and 2nd fermentation times (1-2 days versus 7-10) means more work but also more of the probiotic drink which again can be an advantage, or a disadvantage depending on how much you wish to have on hand at any given time; and how much green tea and honey you want to go through.

Scobies can be left to rest, by leaving about a cup or so of the liquid with the mother scoby for extended periods of time as some concentrated brew is poured off and periodically fed with fresh green tea and honey as the liquid goes down in the jar AKA hotel (about every 4-6 weeks). The scobies can be dehydrated, as well, and will last in the refrigerator for a few months sealed in a plastic bag.

The process starts with making green tea … with boiling about 3 cups of water and adding a little cool, filtered water to the leaves (so it’s not too hot and doesn’t destroy any health benefits of the tea nor produce a bitter brew) … I wait until the container is cool enough to pick it up by hand before adding about 3/8 cup of honey. Use only plastic utensils as metal tends to degrade its potency and enzymes. I have a dedicated set of plastic sieves, spoons and glass eyedroppers (to test the brew). Once at room temperature, add the sweetened brew into about a half cup of the starter (liquid left from the last batch) with the JUN SCOBY. 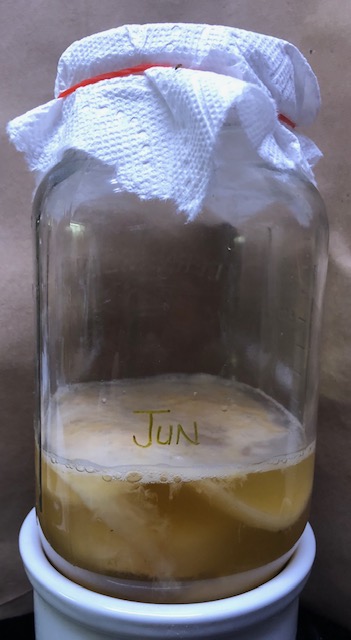 It’s important to always keep the jars covered with a breathable piece of material and a tight elastic at all times. If you look closely (where the elastic meets the paper towel, above) you can see why.

After the room-temperature, green tea and honey mixture is added, the cover is put back … and the wait begins … for about 3-5 days, and then a taste test is done to decide if it’s ready.

You can see from the photo of champs in the glass that the brew tends to retain the same cloudy appearance as the green tea and raw honey mixture that’s added to the starter. That is because of the honey and also the scoby with yeasts floating around in it. Hardened connoisseurs love this but the murky look and slimy texture can be off-putting – but the bacteria and floating yeast beasties are what ferments the tea and honey. 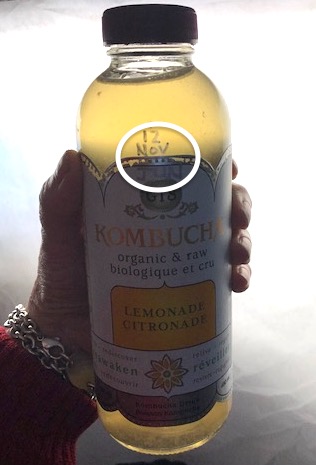 The muddiness settles after the jars sit on the counter and cloudiness will often further clear once, it, or 2nd ferments are put in the fridge and come to rest. I strain the liquid, though, through a sieve as I’m transferring it from the bottle into glasses and this, too, helps to make an even more pellucid liquid.

Once ready, I pour a celebratory glass of fizz and bottle up the rest (and date it using a glass marker) … all but about 1/2 cup which I leave in so the process of making a new batch can begin again.

Many years ago ~ back in 2015, I think it was, I went through the process of growing sweet potato slips … keeping an eye on them every 5 minutes as per Karen’s instructions here. I was dubious and up for the challenge even after mention was made of them not being easy to grow in Canada.

Half a decade earlier, I’d read on yougrowgirl.com about Gayla’s sweet potatoes in a bag and was impressed with the fact that at least the leaves could be boiled and eaten. 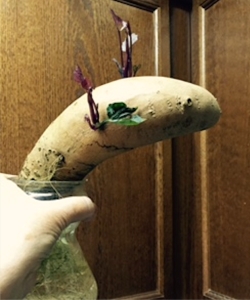 And so it appears, I even planted the slips I grew back in 2010.

I do remember putting down green garbage bags to pre-warm the soil, now that I think about it … and there are pictures to prove I planted all the slips (see below). I do not, however, ever remember harvesting anything … nor do I recollect ever eating any sweet potatoes … or any leaves 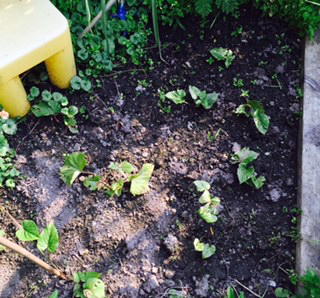 So skipping right ahead to the middle of June 2018, after I’d totally finished planting everything I was going to plant in the garden for the year, I had finally gotten back to house-cleaning and other less important chores and whatnot … when didn’t I discover a couple of long-forgotten, organic, sweet potatoes that had sprouted in amidst the net of some old onion bags.

Well voila! I decided, if nothing else, these might grow a fine line of vines along the entrance fence and cover up some of the ugly along the path where others can see into my allotment plot. I didn’t bother to slip off the slips … just dug two, small, shallow holes  … about a foot from one another and dropped each potato, slip side up, in and covered them up (but not the little vines).

I forgot about them, again, and they began to grow and I continued throughout the Summer to pretty well forget about them … almost completely. I did tuck leaves in and rewind vines back through the fence grid most visits to ensure neighbouring gardeners weren’t accosted by outstretched, needy, fingers of my progeny. Seriously, I can probably count on my own fingers and toes how many minutes of time they were given all season. And I totally forgot I could boil and eat the leaves.

My forgetfulness continued to the point, where it wasn’t until I got home and after what I thought was my last day in the garden, I’d slumped into an epsom bath relieved the day, the season, the year, was over and I realized I probably needed to go back to see if anything had actually grown below the soil … this after reading on one site about the damage they can do if left in … all their acid, or something or other, leaching into nearby areas … yes, I’d denuded the fence of dead black slimy vines and leaves, but I hadn’t given the two potatoes in the soil another thought. Obviously all the work of 2015 had left an indelible scar on my unconscious mind.

Back I went a week later and lo and behold, ka-ching – GOLD … tenfold what I’d put in.

One or two are the size of my baby fingers but most are a decent size. I am looking forward to having a mini side-dish of the little guys at some point.

I left the soil on and am letting them dry before curing them in a cloth bag for a few weeks somewhere warm.

With any luck, a few will even live to sprout again.