Many years ago ~ back in 2015, I think it was, I went through the process of growing sweet potato slips … keeping an eye on them every 5 minutes as per Karen’s instructions here. I was dubious and up for the challenge even after mention was made of them not being easy to grow in Canada.

Half a decade earlier, I’d read on yougrowgirl.com about Gayla’s sweet potatoes in a bag and was impressed with the fact that at least the leaves could be boiled and eaten.

And so it appears, I even planted the slips I grew back in 2010.

I do remember putting down green garbage bags to pre-warm the soil, now that I think about it … and there are pictures to prove I planted all the slips (see below). I do not, however, ever remember harvesting anything … nor do I recollect ever eating any sweet potatoes … or any leaves

So skipping right ahead to the middle of June 2018, after I’d totally finished planting everything I was going to plant in the garden for the year, I had finally gotten back to house-cleaning and other less important chores and whatnot … when didn’t I discover a couple of long-forgotten, organic, sweet potatoes that had sprouted in amidst the net of some old onion bags.

Well voila! I decided, if nothing else, these might grow a fine line of vines along the entrance fence and cover up some of the ugly along the path where others can see into my allotment plot. I didn’t bother to slip off the slips … just dug two, small, shallow holes  … about a foot from one another and dropped each potato, slip side up, in and covered them up (but not the little vines).

I forgot about them, again, and they began to grow and I continued throughout the Summer to pretty well forget about them … almost completely. I did tuck leaves in and rewind vines back through the fence grid most visits to ensure neighbouring gardeners weren’t accosted by outstretched, needy, fingers of my progeny. Seriously, I can probably count on my own fingers and toes how many minutes of time they were given all season. And I totally forgot I could boil and eat the leaves.

My forgetfulness continued to the point, where it wasn’t until I got home and after what I thought was my last day in the garden, I’d slumped into an epsom bath relieved the day, the season, the year, was over and I realized I probably needed to go back to see if anything had actually grown below the soil … this after reading on one site about the damage they can do if left in … all their acid, or something or other, leaching into nearby areas … yes, I’d denuded the fence of dead black slimy vines and leaves, but I hadn’t given the two potatoes in the soil another thought. Obviously all the work of 2015 had left an indelible scar on my unconscious mind.

Back I went a week later and lo and behold, ka-ching – GOLD … tenfold what I’d put in.

One or two are the size of my baby fingers but most are a decent size. I am looking forward to having a mini side-dish of the little guys at some point.

I left the soil on and am letting them dry before curing them in a cloth bag for a few weeks somewhere warm. 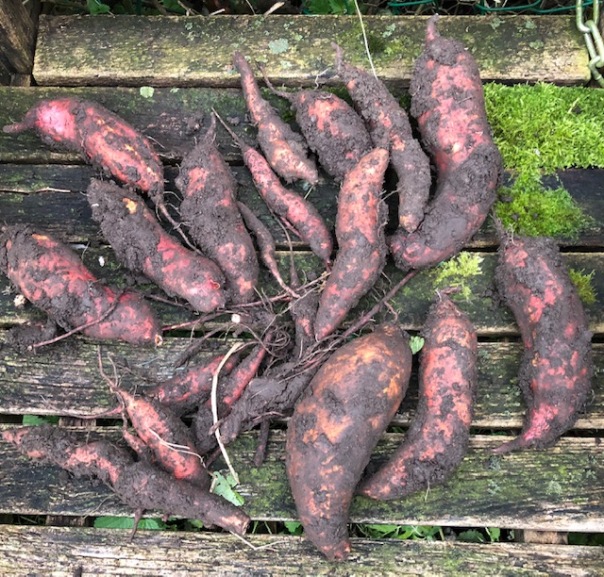 With any luck, a few will even live to sprout again.